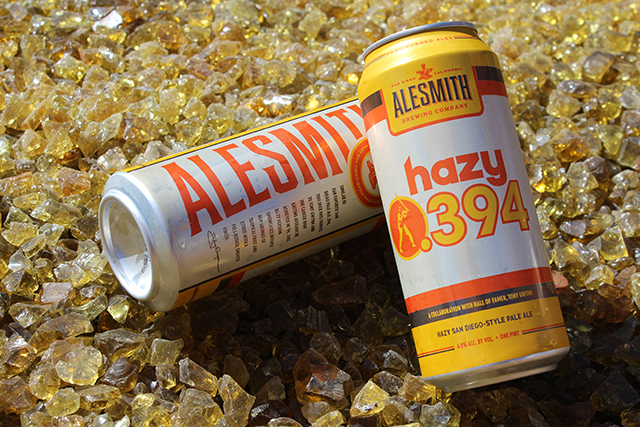 AleSmith Knocks Another Out of the Park with a Hazy Winning Brew
The brewery’s tribute to “Mr. Padre” continues with seasonal Hazy .394

SAN DIEGO, CA (March 2021) – AleSmith Brewing Company is bringing back the treasured haziness that comes with the start of baseball season in San Diego. The seasonal favorite, Hazy .394, has been expertly honed by the AleSmith team to encompass everything beer-drinkers love about a San Diego-style pale ale. This rendition is the hazy cousin to their original .394 – a collaboration with Hall-of-Famer Tony Gwynn that first launched in 2014 and has since won the hearts of craft beer lovers in both Padre territory and nationwide.

“This hazy version of our classic .394 has a more intense aroma of citrus and tropical fruit, as well as a pleasant hazy appearance and a creamy finish,” says Ryan Crisp, Head Brewer/Director of Brewery Operations at AleSmith. “Beer and baseball go hand-in-hand, and we’re excited for Hazy .394 to return in time for the 2021 Padres season.”

It was important to the AleSmith team to create a beer that had the same robust flavor and personality as the original .394, but with the added smoothness of a hazy brew. Perfectly balanced with a touch of tropical fruit in the finish, Hazy .394 clocks in at 6.0% ABV and is available both on tap and in four-packs of 16-oz. cans. Versatility reigns supreme with this hazy creation, which is why it pairs just as effortlessly with ballpark favorites as it does with a hearty tri-tip.

Hazy .394 will be available from now until June, in honor of “America’s Greatest Pastime,” and the life of San Diego’s hometown hero and baseball legend, Tony Gwynn. Get your hands on Hazy .394 by visiting AleSmith’s Beer Finder to find a store closest to you!