“As a brewery entering its 25th year and regarded worldwide, it is crucial to keep a fresh look, while maintaining the hallmarks of our brand,” owner Peter Zien says. “We couldn’t be more pleased with the soon-to-be- unveiled rebranding exercise completed with Blindtiger Design of Seattle.”

The new bold and modern designs pay homage to AleSmith’s roots of hand-forged ales, and maintain the anvil as the cornerstone of the AleSmith brand. Beautifully stylized fonts and logo placements create a uniformity of the brewing company’s various labels that are both pleasing to the eye and informative in style. And as always, AleSmith’s customers can expect to encounter a world-class beer pouring from these new cans, bottles and draft handles!

“As a member of the craft beer community and culture, we take a lot of pride in working with one of the most esteemed breweries out there,” says Blindtiger’s Creative Director and Founder, Oceania Eagan. “We knew a brand update was needed to reflect the respect that the brewery has gained over their 25-year history, to better communicate their story within this increasingly competitive market.”

The onset of 2020 also marked AleSmith’s debut of Forgeberry Ale. With its vibrant ruby color and bold “refreshingly tart” taste, this low-calorie raspberry ale is named after AleSmith’s iconic anvil logo and the massive amount of delicious raspberries used in the brewing process. Forgeberry is the company’s first year-round fruited offering and follows on the success of RKS; AleSmith’s popular seasonal raspberry gose.

“Our fans can’t get enough of this beer,” says Ryan Crisp, Director of Brewing Operations. “We are excited to offer a low-calorie option that has a ton of flavor. We spent a lot of time experimenting to hit the perfect balance of sweetness, tartness, and drinkability. And at the end of the day, this is the beer that we all want to drink. We’re pumped with how it turned out and we think beer drinkers of all types will love it.” 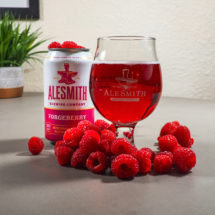 Forgeberry hits a sessionable 4.9%-AbV and only 120 calories, and is AleSmith’s answer to a flavorful, well-crafted fruit beer that aligns with the preferences of calorie-conscious consumers. The result is a beer that is refreshing, flavorful and easy-drinking.

Forgeberry is currently available in the AleSmith tasting room and throughout the broader retail marketplace. Look for Forgeberry Ale in stores throughout AleSmith’s distribution network.

AleSmith is clearly starting off 2020 with a whole lotta buzz. Stay tuned for more excitement to come!

Forged in 1995, AleSmith has been recognized by consumers and critics alike as one of the world’s foremost craft brewing companies behind accolades that include medals won at prestigious national and international beer competitions. In addition to being well established within its hometown of San Diego, AleSmith was acknowledged by the RateBeer community as the 6th Best Brewery in the World in 2018. The brewery is also a three-time winner of the Champion Brewery Award at the San Diego International Beer Competition, where it received a Gold Medal in 2019 for Nut Brown English brown ale. Further recognition for individual beers includes a 2016 Gold Medal for Old Numbskull, and a 2017 Bronze Medal for Wee Heavy at the Great American Beer Festival. AleSmith is celebrating its 25th year in business and occupies a 109,942 square-foot facility with a state-of- the-art brewery. AleSmith’s range of acclaimed beers, which includes Speedway Stout, Nut Brown Ale, and San Diego Pale Ale .394 is distributed in 28 U.S. states and 8 countries.

next
REOPENING THE TASTING ROOM