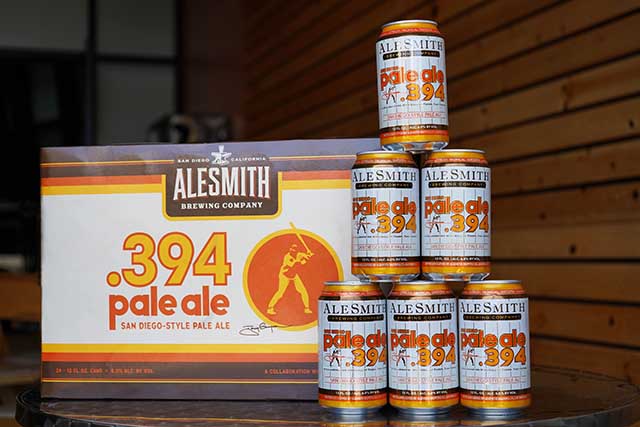 San Diego, CA (July 2022) – San Diego-based brewery, AleSmith Brewing Company, is rolling out 12-packs and 24-packs of .394 Pale Ale throwback cans in preparation for their Tony Gwynn Day celebration at their Tasting Room on August 6th. These cans will be available in limited-run Throwback Packs throughout San Diego featuring the vintage .394 pinstriped design from previous years.

“With baseball season in full swing, we’re feeling nostalgic looking back on .394’s evolution and seeing where it is today,” says AleSmith owner, Peter Zien. “This beer was Tony’s dream for baseball and craft beer fans to enjoy and we’re honored to continue putting our heart and soul into every drop brewed.”

Forged in collaboration with Hall of Fame inductee, Tony Gwynn, .394 San Diego Pale Ale has emerged as the unofficial craft beer of San Diego baseball since its debut, with 2022 marking its eighth year as San Diego’s Hometown Beer.

It all began in 2014 when Tony Gwynn, now otherwise known as “Mr. Padre,” was introduced to AleSmith Owners, Peter and Vicky Zien, after expressing interest in crafting his own beer to a mutual friend. Peter was fully on board with the collaboration, so they kicked off the process with an informal AleSmith beer tasting, after which Tony immediately knew he wanted his beer to be “light with a kick.”

They worked together to hone a brew that comprised a flavorful, malty profile showcasing a tropical fruit and citrus-forward hop character, and slight caramel sweetness to add complexity and balance. The Gwynn family was enlisted to provide feedback on each test batch, and the resounding winner was a golden pale ale full of American hop flavor and aroma, balanced with a subdued bitterness and a malty

In honor of Tony Gwynn and his 2000th and 3000th hit milestones in 1993 and 1999, AleSmith is hosting an all-day celebration on August 6th at their Tasting Room located at 9990 AleSmith Court off Miramar Rd. The festivities will include Padres trivia, live art activation, game day watch party, and the release of two commemorative limited-release beers, Mr. Padre 2000 and Mr. Padre 3000 featuring artwork by San Diego muralists, Paul Jimenez and Signe Ditona of Ground Floor Murals.

“We’ve painted Tony Gwynn several times. When we had the opportunity to paint for this event, for this day, and this collaboration, we were more than touched,” says Paul Jimenez from Ground Floor Murals. “We decided to paint this piece a little bit different from our usual work with photorealistic murals. We wanted to implement some oil pastels, something more artsy, not only to pay our respects from a more personal standpoint but also as an original and unique design strictly for this beer. 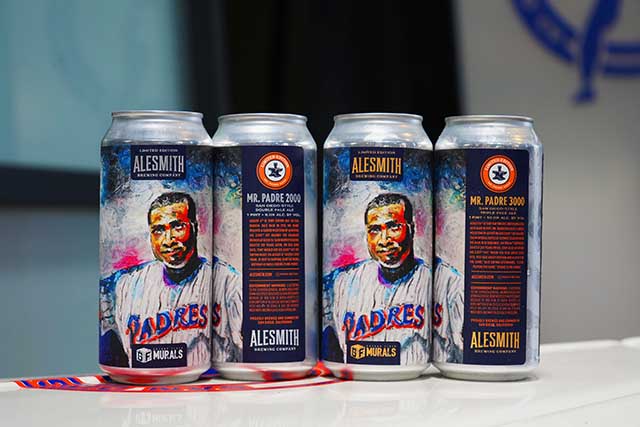 .394 Pale Ale throwback cans will only be around for a limited time at retail locations throughout San Diego. 12-packs and 24-packs can be found using AleSmith’s Beer Finder.