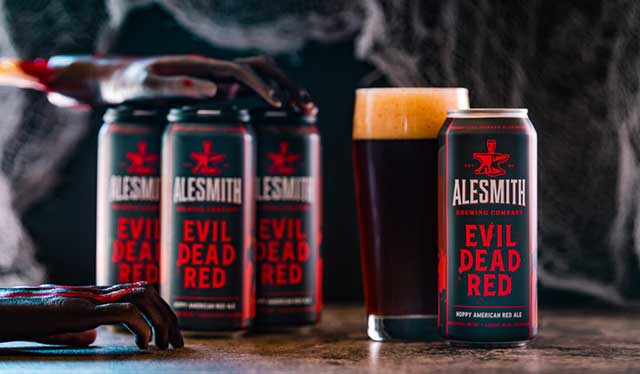 AleSmith Brewing Company Gets Ready for Halloween with Evil Dead Red and Fright Nights
Spooky Season has arrived at the San Diego brewery with new releases and a haunted brewery trail.

SAN DIEGO, CA (October 2022) – AleSmith Brewing Company is in the full swing of Halloween with Evil Dead Red Ale and the return of haunted maze, Fright Nights. Evil Dead Red is a seasonal Hoppy American Red Ale that is available for the first time in 16oz 4-pack cans.

Back from the dead and deep blood-red in color, this hoppy red ale has an intense aroma of pine and citrus from an abundance of American hops balancing the sweetness and rich, bready flavors of this beer’s caramel malts. The result is a fiendishly smooth brew coming in at 6.66% ABV that will make your taste buds scream with delight.

In addition to the return of Evil Dead Red, AleSmith Brewing is hosting Fright Nights, a behind-the-scenes haunted brewery maze in partnership with Scareventures. This haunted maze will be available every weekend in October including a kid-friendly Trick or Treat trail on October 29th and 30th. General Admission and Designated Driver tickets are available for Fright Nights on Eventbrite. Get tickets here.

Keep up with AleSmith Brewing Company:

Forged in 1995, AleSmith has been recognized by consumers and critics alike as one of the world’s foremost craft brewing companies, with accolades that include medals won at prestigious national and international beer competitions. In addition to being well-established within its hometown of San Diego, AleSmith was acknowledged by the RateBeer community as one of the Top 10 Best Breweries nationwide in 2019 and 2020. The brewery is also a three-time winner of the Champion Brewery Award at the San Diego International Beer Competition, where it received a Gold Medal in 2019 for Nut Brown English Brown Ale. Further recognition for individual beers includes a 2016 Gold Medal for Old Numbskull and a 2022 Gold Medal for Wee Heavy at the World Beer Cup. AleSmith occupies a 109,942 square-foot facility with a state-of-the-art brewery. AleSmith’s range of acclaimed beers includes Speedway Stout, Nut Brown Ale, and San Diego Pale Ale .394, distributed in 21 U.S. states and nine countries.