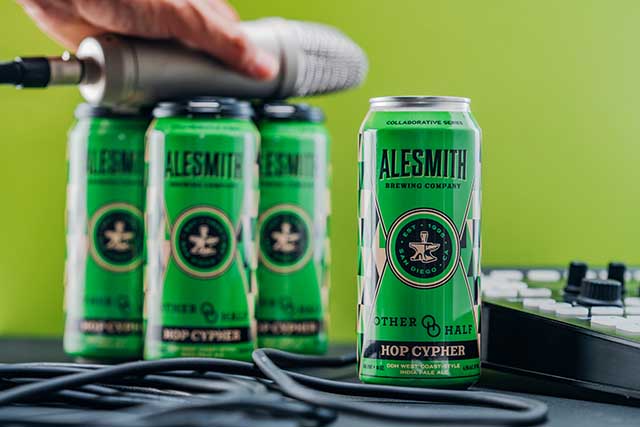 SAN DIEGO, CA (September 2022) – AleSmith Brewing Company is joining forces with New York brewery Other Half Brewing Company to release Hop Cypher, a double dry-hopped West Coast-style IPA. Brewed with Pacific Northwest hops, the collaborative release will be available through the month of September in 16-oz. can 4-packs.

Brimming with tropical fruit, berry, and citrus aromas, Hop Cypher is jam-packed with a unique blend of Strata, Mosaic, and Chinook hops. Notes of grapefruit, mango, and strawberry bring this collaborative brew together for a fruit-forward IPA with ultimate drinkability.

“Teaming up with the crew at AleSmith for an IPA is a perfect east meets west scenario,” says Samuel Richardson, Co-Founder and Brewmaster at Other Half Brewing. “We have big respect for the legacy that AleSmith has built over the years driving the San Diego beer scene. Big thanks to the AleSmith team for welcoming us into their brewery!”

“We’re excited to have Other Half come out to San Diego and work with us on this collaboration,” says Ryan Crisp, Director of Brewery Operations. “Samuel and his team are doing big things on the East Coast and creating some incredible beers. We hope everyone enjoys this beer as much as we enjoyed making it.”

Hop Cypher starts hitting retail shelves throughout California this week and will be available at select distributors nationwide, plus on-draft at AleSmith’s Tasting Room in San Diego. Find the retailer nearest you by visiting AleSmith’s Beer Finder.

Keep up with AleSmith Brewing Company:

Forged in 1995, AleSmith has been recognized by consumers and critics alike as one of the world’s foremost craft brewing companies, with accolades that include medals won at prestigious national and international beer competitions. In addition to being well-established within its hometown of San Diego, AleSmith was acknowledged by the RateBeer community as one of the Top 10 Best Breweries nationwide in 2019 and 2020. The brewery is also a three-time winner of the Champion Brewery Award at the San Diego International Beer Competition, where it received a Gold Medal in 2019 for Nut Brown English Brown Ale. Further recognition for individual beers includes a 2016 Gold Medal for Old Numbskull and a 2022 Gold Medal for Wee Heavy at the World Beer Cup. AleSmith occupies a 109,942 square-foot facility with a state-of-the-art brewery. AleSmith’s range of acclaimed beers includes Speedway Stout, Nut Brown Ale, and San Diego Pale Ale .394, distributed in 21 U.S. states and nine countries.

About Other Half Brewing Company:

Founded in 2014 in Brooklyn, NY, Other Half Brewing is rooted in a simple mission: to push the boundaries of beer. Other Half has built a loyal community of fans around its beers with breweries in Carroll Gardens and Williamsburg, Brooklyn; Finger Lakes, NY; Washington D.C.; and a taproom at NYC’s iconic Rockefeller Center, as well as its innovative Pastrytown and Green City festivals. Other Half has developed partnerships with like-minded breweries around the world to innovate and develop out-of-the box opportunities, includingAll Together Beer, for members of the brewery community to come together and consistently create new and exciting beers for the brewery’s global fan base.