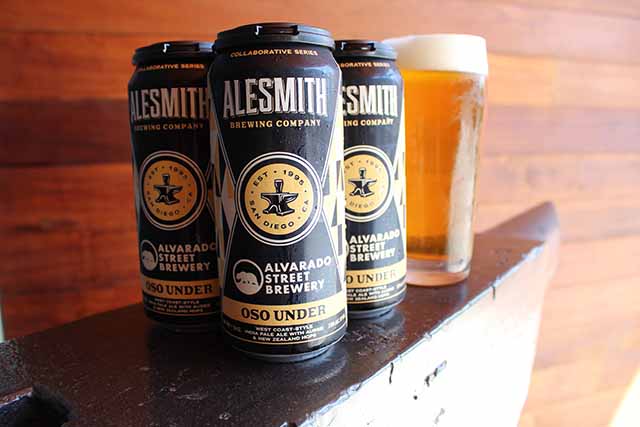 SAN DIEGO, CA (June 2021) – AleSmith Brewing and their buddies at Alvarado Street Brewery are shaking things up with a new West Coast IPA inspired by Aussie and New Zealand hops. Crafted to hopped perfection, Oso Under is teeming with brightness, curbed by a dry finish, and infused with Galaxy, Vic Secret and Nelson hops all the way from “down under”.

“We are very excited to work with J.C. and his team at Alvarado Street,” says AleSmith’s Head Brewer and Director of Brewery Operations Ryan Crisp. “The beers they are producing are top-notch and we’re delighted to collaborate on a beer that would truly be something special. We decided on a clean West Coast IPA with large amounts of Australian and New Zealand hops, inspired by ours and J.C.’s roots to San Diego. The beer turned out excellent and we can’t wait for our fans to try it.”

The unique blend of hops melds the breweries’ distinct strengths to yield a West Coast IPA that stands alone in character and quality. Galaxy hops are the star of the show with their passionfruit, citrus, and peach flavors and aromas, while Vic Secret hops, hailing from Victoria, Australia, tout tropical fruit, herbs, pine, pineapple and passionfruit. Nelson Sauvin hops round out this beloved Aussie/New Zealand extravaganza with fruit-flavored accents.

“We’re thrilled at the opportunity to collaborate with AleSmith,” says Alvarado Street co-owner and Head Brewer J.C. Hill. “I started my brewing career in San Diego and was heavily influenced by AleSmith IPA, X, both YuleSmiths and many other beers I was lucky enough to cut my teeth on over a decade ago. San Diego is very near and dear to my heart, having lived there for much of my twenties, and the beer scene continues to be one of the best in the world.”

Oso Under will be available in four-packs of 16-ounce cans at select AleSmith retailers nationwide. Find one closest to you by visiting the brewery’s Beer Finder.