SAN DIEGO — AleSmith Brewing Company is offering a new way to enjoy the classic European-style brewery’s barrel-aged beers. To make these popular styles more accessible to the casual imbiber, they recently released a new Cinnamon Vanilla Barrel-Aged Speedway Stout and already popular Barrel-Aged Old Numbskull in 330 ml (11.2 oz) bottles. Packaged in custom “Barrel-Aged Release” two-packs, these higher ABV beers can be enjoyed more easily by an individual consumer as compared to the traditional 750 ml bottles that AleSmith has provided in past years. 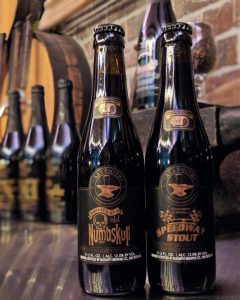 The Cinnamon Vanilla Barrel-Aged Speedway Stout, with its 13% ABV, is a blend of two different versions of AleSmith’s award-winning Speedway Stout, each going through its own unique aging process. The first part of the blend was aged in American oak bourbon barrels; the second part of the blend was aged in bourbon barrels that had previously held cinnamon and vanilla extract. After aging, these two parts were blended and aged again with vanilla beans and cinnamon sticks and given a dosing of locally roasted coffee. The effect is a full-bodied brew with complex notes of chocolate, coffee, vanilla, and cinnamon.

When asked about the motivation for the reduced bottle size, AleSmith Owner, Peter Zien remarked, “For years, fans of our Barrel-Aged beer program have enjoyed our offerings in the large 750ml (25.4 oz.) glass bottle format. This size was ideal for cellaring beer and sharing with friends but could be intimidating for single serve use. I’m very excited to see our two newest Barrel-Aged offerings in user-friendly 330ml (11.2 oz.) glass bottles. You can now purchase the Barrel-Aged Cinnamon Vanilla Speedway Stout and the 2018 Barrel-Aged Old Numbskull in beautifully decorated gift boxes consisting of 2 bottles of each or mixed 2-packs.”

Limited quantities of these 330 ml (11.2 oz) releases are available for purchase in mix and match packs of two only at the brewery. Visit http://www.alesmith.com/specialtyreleases for information on all current AleSmith limited time offerings.

AleSmith Brewing Company offers growler fills, bottles, and official AleSmith merchandise for sale during tasting room hours. If you are interested in tours, please send us an email at tours@alesmith.com! We are also kid and dog friendly.

Search HotelsCombined for hotels and rates near our brewery